If you’ve had a piece of electronic gear fail in the last few years, there’s a good chance it’s due to one or more bad capacitors inside. The problem most infamously reared its ugly head on motherboards produced in the middle of the previous decade, but that’s just a place where it’s highly visible. If you had a DTV converter box, a DVD player, or some other device fail in the same timeframe, it may have had the same problem.

If I had a failed motherboard, I’d probably just swap the motherboard. I’m more inclined to fix an LCD monitor or a DTV converter box.

And for clarification, by “fail” I mean anything other than behaving properly. It could mean the unit stopped powering up. It could mean it powers on but does weird things. It could mean it turns itself off. I have a DTV converter box that buzzes like an AM radio trying to pick up a distant, weak signal. I don’t know if that’s due to a failing capacitor or if it’s just poor design, but I’m inclined to check. 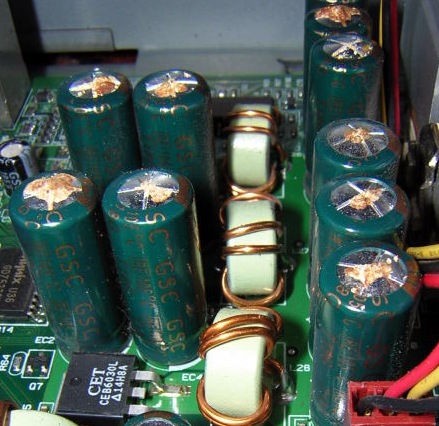 The capacitors in this image are bulging and leaking, both signs of failure. The tops of a good capacitor should be flat, clean, and shiny metal. Image credit: Jens Both Elcap/Wikipedia

This FAQ has some good information, including a list of reputable manufacturers and their product lines, in order from lowest grade to highest. The same site also has some good tutorials on how to go about safely removing failing/failed capacitors and replacing them.

I’ve also picked up some tips hanging out on various repair forums. Go with a reputable make–Nichicon, United Chemicon, Rubycon, Sanyo, Panasonic, and NIC Components are all reputable–and a low ESR. The lower, the better. If you can afford to, step up from an 85 degree to 105 or 125 degree rating, and if you can go up a voltage grade and the part will still fit, do that too. And if you can upgrade from electrolytic to solid polymer capacitor of the same rating, that will help. An over-spec, high quality replacement can easily last decades.

There’s a good chance, especially if you’re trying to buy top-quality replacement components, that you’ll have to order from a supplier like Mouser, unless you happen to have a very good electronics supply store nearby.

Manufacturers seldom overbuild things anymore, so they’ll put the cheapest part that will do the job in place. If it lasts the warranty period, then it’s done its job. It makes sense for them to save every penny they can.

If you’re repairing a unit and would rather not repair it again, you have a lot more motivation to use the best-possible replacements and pay a couple of dollars extra.

previous10 worst ways to make extra money
nextFacebook’s IPO doesn’t have to be the end of Silicon Valley
Tags:capacitorcapacitorspanasonic